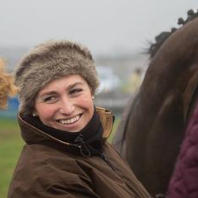 Jaimie rode out at Arlary while still at school and joined in 1995, many years ago and is our longest serving member of staff. Jaimie has covered all of the jobs in a race yard, and in 2000 she became Lucinda’s Assistant Trainer. With the expansion of the yard in 2013 Jaimie became responsible for planning the travel logistics and the race day organisation. Jaimie often does the long distance travelling and will oversee their work if they are away from home. Jaimie is a most positive and supportive team member and has the welfare of the horse at the heart of her day. Having been here since we started Jaimie is an important part of the team and is the rock for the staff, jockeys, owners and trainer. She has made a huge contribution to the success of Arlary House Stables, and was recognised with a final three place in the Godolphin Stud & Stable Staff Dedication To Racing Award in 2019