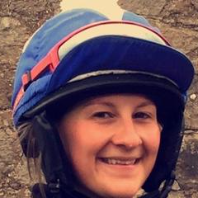 Gemma joined us in November 2014 having worked in various yards, including in an animal rescue centre in South Africa. An outgoing girl she rides out and having attained her HGV license in December 2017 she helps Jaimie and Steve with the driving, between yards and to race meetings. In September 2015 Gemma attended the work riders course at Newmarket Racing School. In the autumn of 2018 Gemma started a university course at Perth but continued to ride out and drive part time. In the summer of 2020 Gemma agreed to stand in as Head Girl at Arlary after Ciorstaidh left, and took on her new role with typical enthusiasm and organisation. Returning to university in the autumn she will continue to help out in various roles while studying. Gemma is a keen gardener in her spare time as well as being a qualified masseuse and enjoying gymnastic pole dancing.