Green Vaults Into The Winner’s Enclosure

We notched our second success of 2022 at Ayr yesterday when Green Vault sluiced through the mud to win the conditional jockeys’ handicap hurdle by a comfortable 5½ lengths. Partnered by Alan Doyle, who was having his first ride for the yard, he relished the return to testing ground on his handicap debut and readily asserted when asked to go and win his race from the second last. He has until a week on Friday to run unpenalised so there is every chance he’ll be out again quickly. 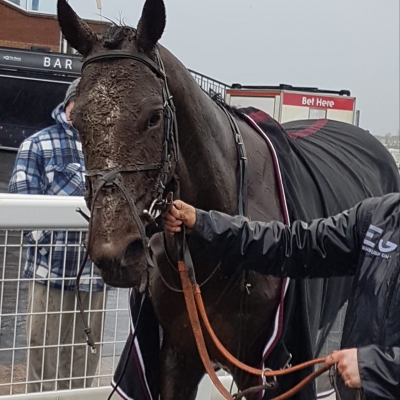 A mud-splattered Green Vault in the Ayr winner’s enclosure

Also at Ayr, there was a creditable run from Vengeur de Guye to be third in the 2m handicap chase under the welter burden of 12-0, whilst Douglas Talking couldn’t quite see his race out on the testing ground and faded to be fourth in the 2m novice handicap hurdle. Still a work in progress, we expect him to be seen to better effect back up in distance on a sounder surface.

A trip to Newcastle failed to bear fruit on Saturday, with both Without Conviction and Rapid Raider unable to match their previous winning exploits, Without Conviction only third of four in the mares’ handicap chase having run keen and hung-right handed in a slowly-run affair. Rapid Raider meanwhile found it hard work in the sticky ground, making a few jumping errors on his way to finishing sixth when bidding to complete a hat-trick in the 2m4f handicap chase.