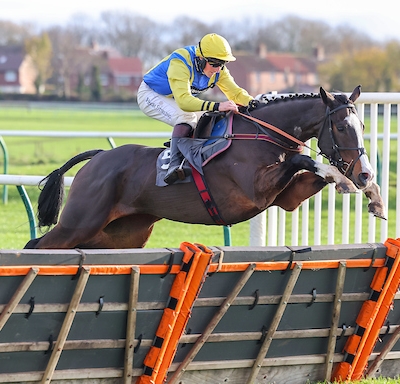 Spark of Madness had shaped with promise on numerous occasions prior to heading to Ayr on Monday, so it was particularly satisfying to see him put it all together and gain a first career success in the 2m handicap hurdle. Under a complete change of tactics, he was given a positive ride by Stephen, disputing the lead all the way before quickening clear at the top of the straight. He gave us all a scare by standing a mile off the final hurdle, but he has such scope he managed to clear it, and despite idling close home, had enough in hand to score by ½ length. Still only a five-year-old, he should continue to progress as he develops physically.

We were also thrilled with the performance of Royal Reserve in the same race as he came from off the pace to take third under Patrick. This was a big step in the right direction following a couple of attempts over fences and he has fallen to a good handicap mark.

There were two fourth-placed finishes from Bollingerandkrug and Vengeur de Guye, with both leaving the impression there are bigger performances to come when the emphasis is more on stamina. We were pleased with how Bollingerandkrug jumped stepping up in class on only his second chase start and will look to get him back over 2½m next time, whilst Vengeur de Guye just lacked the speed of his younger rivals late on and softer ground will play to his strengths. Although about to turn thirteen, it is clear he retains all of his enthusiasm for racing.

Our other runner on the card, Red Missile, faded out of contention from the home turn in the 2m3f handicap hurdle and will now get a well-deserved break ahead of returning in the New Year.